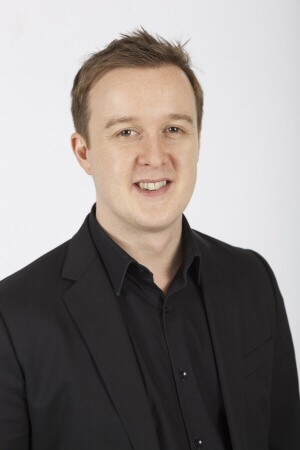 Michael Higgins is a pianist, composer and arranger, and Artistic Director of Sonoro.

With a special interest in choral accompaniment, Michael is in demand with some of the leading choirs in the country and has worked with the National Youth Choirs of Great Britain, London Voices and the BBC Singers. In 2012 Michael spent six months travelling across the USA filming a series for American television with popular choir master Gareth Malone, and also appeared on the Queen’s Christmas Message accompanying the Military Wives Choir at Buckingham Palace.

Michael has performed throughout the UK at venues including the Royal Festival Hall, London, Symphony Hall, Birmingham and Usher Hall, Edinburgh, as well as across Europe and further afield in Australia, New Zealand amd the Solomon Isalands. As a rehearsal pianist, he has worked with conductors Daniel Barenboim, Gustavo Dudamel, Jiří Bělohlávek, and Sakari Oramo.

As a composer and arranger he has written for the Stay at Home Choir, Wimbledon Choral Society, Farnham Youth Choir, the RSNO Junior Chorus, the National Children's Choir of Great Britain, as well as music for television, corporate films and commercials. Many of his works are published by the Royal School of Church Music, Novello, and Oxford University Press.

Michael studied piano with Margaret Newman at the Royal Birmingham Conservatoire, and at the Royal Academy of Music, London, with Iain Ledingham and Julius Drake. He was awarded the Joseph Weingarten Memorial Trust Scholarship and continued his studies with Kálmán Dráfi at the Franz Liszt Academy of Music, Budapest.

Note: for concert programmes, please contact Michael for an updated and/or shortened biography.